Despite the weather we've been out and about in the study area re-sighting birds. In the paddocks near the weir (the very east of the study site) we caught up with CH and a colour ringed male but we could not read his ring combination.  He is likely to be AS, who was ringed and seen there in the past. CH was ringed in January of this year at the allotment feeding station, making her a long distance mover in terms of this project!The metal ringed only male was seen again. However, he seems to have lost his tail since the last time we saw him. Perhaps he has had a narrow escape from a sparrowhawk, cat or been in a brawl? Or perhaps its an entirely different bird?!

A ringing session in the paddocks failed to catch the metal ringed male. Although we were unsuccessful on that front we did manage to add two new birds to the project, bringing our total of colour ringed birds to 45 (project total 47). We also managed to catch a  Mistle Thrush, only the second one we've caught, and two chiffchaffs which is a sure sign that spring has finally arrived. 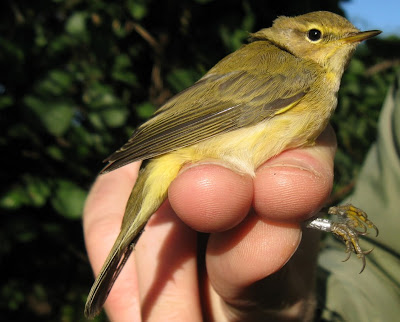 Casual re-sightings of birds along the main avenue has also revealed another sign of spring when C3, an adult female, was seen adding to an already full beak of worms. She was seen flying off over a hedge into the Pontcanna Permanent Allotments where she is obviously feeding a hungry brood; a timely reminder that spring has sprung and that we should start nest recording pretty sharpish!﻿
Posted by Unknown at 06:51 No comments:

Have we met before?

On the whole the recent weather has not be conducive to catching birds but we have managed the odd session. The last resulted in four new birds for the project bring our total to 43 colour ringed birds and 45 birds ringed since the project started. Among the four new birds was a male with a white chin spot. Hopefully this will be as a useful aid to identifying this bird as B6's white spot.


We have of course been continuing with re-sighting already ringed birds. One surprise while trying to re-sight birds in the east of the study site was coming across the male pictured below. Although several blackbirds have been ringed in other parts of Cardiff, prior to the start of the project only a handful of blackbirds had been ringed on our site; and only one of these was male. If this is LB09234, he is doing well as he will be in his fifth calender year!
Posted by Unknown at 14:34 No comments: