As of this week we reached double figures for the number of individual blackbirds re-sighted for the year.

Bird 10 was BJ, a female blackbird first ringed in 2012. This is our first sighting of her since then so it is good to know she is still with us. Seen on the same day was BB, a male. He was ringed last year, and was seen on several occasions in 2013. BB was had a beak full of worms so has a brood somewhere. 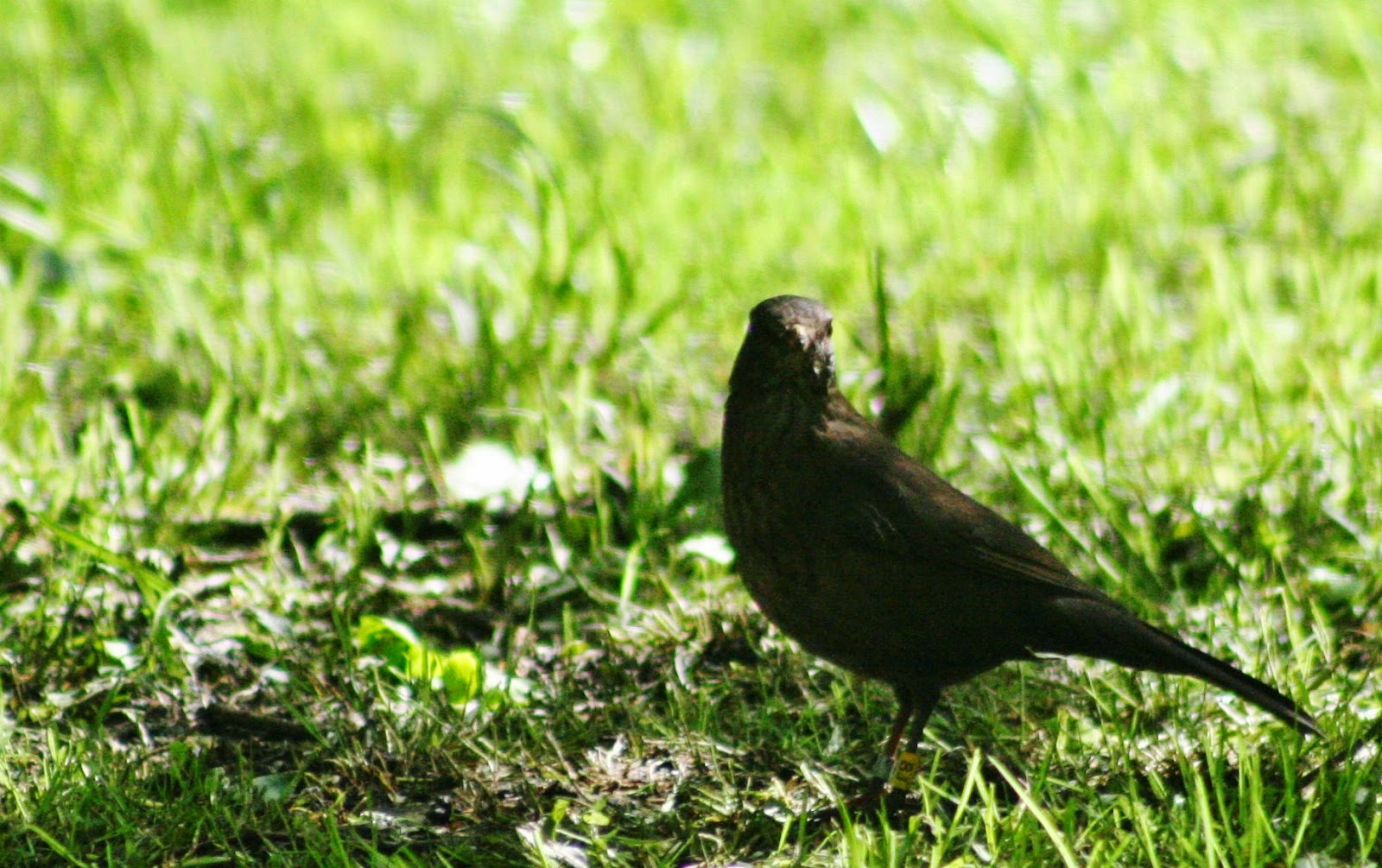 Recently we were told of a blackbird "with something on it's legs" near some houses south of the study site. So while the trail was still hot, we headed out and soon spotted a familiar site; that of a blackbird with yellow ring! A bit of stalking and lots of photos later we managed an image that revealed the code 'BD' - our first out of site movement! Although we should come clean straight away and say that it was only about 200m out of the study site boundary... does it still count?!


This might not be as far as some urban ringed blackbirds can move but it does raise a question about territory. BD was seen in his "normal" location mostly in January and February 2013 but the spot was taken by an un-ringed male during the following breeding season. Was BD ousted? Or perhaps there is another explanation. Some resident blackbirds are known to have have a summer and winter territory;could this be the case here? If it is the case then BD could learn a thing or two from this blackbird.

Of course for the Cardiff Blackbird Team there is a negative to this sighting; its justified our habit of checking the legs of every blackbird we see!

We had our first successful catching session of 2014 this morning - a new female, Red over Yellow (R/Y) was caught at the eastern most end of the study site. There were plenty of blackbirds in the area but none were ringed. Despite a lot of blackbird activity around the nets we only caught one. We did, however, catch a mallard! The largest bird we have caught on the project!

Given the amount of bird song at the study site today it is clear that spring has finally sprung! Blackbirds abound and several were seen in territorial disputes. Three birds with rings were seen but we only managed to read one code.

BN was ringed in December 2013, the same year she hatched, and has not been seen since July last year. Not far from BN was a male with a beak full of worms so we know breeding is underway in the allotments! Whether this was BN's mate or not was unclear. We had hoped to follow the male back to his nests but he steadfastly refused to move until we were too far away to see where he was going!

Not a Big Garden Birdwatch for Blackbirds


Earlier this year almost half a million people spent an hour looking out of their windows with one aim – to record the birds they saw as part of the RSPB’s Big Garden Bird Watch.

This annual survey, which has been running since 1979, provides a snap shot into the fortunes of the UK’s garden visitors and provides an easy and fun introduction to the world of bird surveys. Not to mention of course an excellent excuse to watch birds for an hour with a bacon sandwich and a cup of tea!

At the UK level it was all change in the top ten and you can find the results here. However, we are really interested in blackbirds here, and our species of choice has dropped from second to fourth position across the UK. Within Wales, despite holding onto 5th position, the average number of birds seen in Welsh gardens fell from 3 in 2013, to 2.1 in 2014.

Within Cardiff the Blackbird faired even worse! Although it was the fourth most counted species, the average Cardiff Garden held a meagre average of 1.8 Blackbirds in 2014!

This drop in fortunes could be explained by low productivity the species experienced in the hot dry summer of 2013, which was down 12% compared to the five year average according to the BTO's figures.

Big Garden Birdwatch takes places on the last January of each year, so put the date in your diary for 2015!
Posted by Unknown at 03:36 No comments:

A sunny St David's Day jaunt around the study site as part of the BTO's Winter Thrushes Survey provided the perfect opportunity not only to see some winter thrushes but also to re-sight some of our birds. Both turned out to be a bit of a success; not only did we see all the species of thrush that make their UK the home in the winter, including over 180 redwing, but we also saw six our birds!

One was Orange over Yellow (O/Y); one of the birds ringed under our new marking system. O/Y hasn't moved far since we marked him but it was good to see him.

AB is a bird we are always pleased to see as he was the first bird marked by the project when it started in April 2012. He was at least two calendar years old then, making him at least four years old now.
As for the others:
AH - put in another appearance this year
BT - only the second time we have seen this bird since he was ringed in 2012
BK - is a project regular.
FH - this was the first time he has been seen since 2012

As we have now entered out RAS period these six birds will count towards are breeding season survival analysis.

Its safe to say that we saw a good number of blackbirds on our Winter Thrushes Survey, 36 in total. Each of the yellow dots on the image below represents a blackbird registration but a dot might be more than one bird. Take the four western most dots which combined represent 10 birds! We've seen this number or more there on a number of occasions.

So it seemed a safe bet to head there on Sunday morning for a bit of an impromptu catching session in the hope of adding more birds to the project. After two hours we packed up having seen only two blackbirds 100m away, and nothing in the nets! The fortunes of fieldwork!
Posted by Unknown at 11:32 No comments:

We have been taking advantage of some recent respites in the weather and have been out re-sighting blackbirds or at least attempting too!

There are good numbers of blackbirds in the study area with several ringed birds being spotted. But as February draws to a close we have only managed to read four codes so far, all on the same day.

Hopefully as the weather improves and evenings become lighter we'll get more!
Posted by Unknown at 11:36 No comments: