End of Year Round Up

Well as another year draws to a close its only fitting that we say thank you and Happy New Year to those who have been helping with catching and re-sighting birds, publicising the project, or just reading the blog!

Our highlight of 2013 was reaching the 50 bird milestone! For a while it didn't seem like we'd make it! Although the birds haven't exactly been rolling in since then and we finish 2013 on a project total  of 56 birds; 29 of these being caught in 2013.

We had 99 re-captures/re-sightings of 22 individual birds in 2013 compared to a mere nine in 2012! A big thank you to Hattie Fuller, Ellie Brown and everyone who has contributed to these. We'll be looking to beat this number in 2014 so keep your eyes peeled and don't forget to tell us!
As you can see from the graph below there is a lot of variation in the number of times different individuals have been re-sighted. This will be in part down to the individual behaviour - its no surprise that A4 tops the chart as he is the most approachable bird we've ringed. Other highly visible birds were often on the avenue (e.g BX and BK) or easily recognised such as B6. 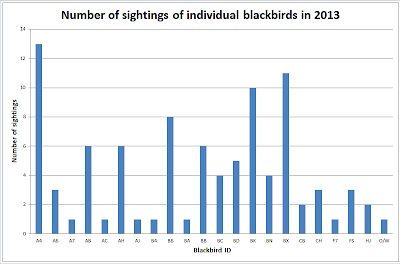 During 2014 we'll keep you up to date with the project's progress and news. 2014 will be on us in a matter of hours and the start of the breeding season hot on its heals. What will 2014 hold? Hopefully lots of blackbirds!